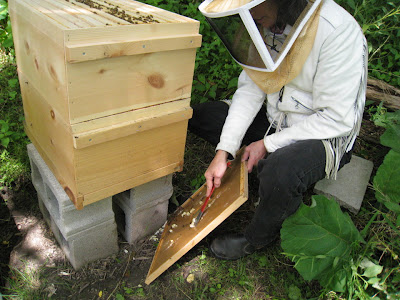 It’s been quite a few years since pennies held any fascination for me, but beekeeping has brought them once again to a significant place in my life. My first sting as an adult was in Ken’s beeyard, and right away Steven put a penny on it for me. No swelling or pain. Weird! But wonderful. I started telling everyone who had the potential to be stung by a bee, that they should put a penny on it because it really works. My second bee sting, same story. Penny to the rescue yet again.

Along the way, people questioned what it was about the pennies that gave them these magical bee-sting-soothing powers. Some wondered if it mattered whether it was Canadian or American, or whether older or newer pennies were better. I had no idea, I just knew it worked for me.

Then…. my day of foolishness, tearing apart a beehive with only a veil as any significant sting protection. Well, the pennies didn’t work so well that day. I thought because I had so much venom pumping through my system, perhaps the pennies were no match for it.

Well – here’s a new piece of information from my fellow beekeeper Margaret, who also started beekeeping this spring:

I discovered the copper content of pennies is less than 5%, except the older coins (pre 1982 for the American ones) are 95%. I’m still skeptical about the copper cure.

Perhaps the level of copper makes a difference, or maybe it’s all in my head, but I’d rather put a penny on it than a piece of onion. (That was Todd’s trick.)

The photo above is of Margaret, scraping off the inner cover of one of her beehives. She rides her motorcycle to check her bees, and finds that the leather makes a good bee jacket!
.